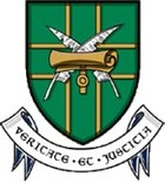 What fees does a Notary Public charge?

The fees charged for notarizing or attesting documents depend on the complexity of the issue, the volume of the documentation involved and the time, expertise and responsibility which the notary is required to devote to the matter.
​
Every transaction is different but the following is provided for guidance purposes only based on our experience of carrying out various notarial acts in different contexts.
Usually, the fee for verifying the identity of a person and witnessing their signature and/or sealing a document for use in a foreign jurisdiction is €50. A similar fee is charged for verifying an original document or certifying a copy document as a true copy of an original. The value of the Notary's signature and seal on a document is that it verifies the document and enables it to be accepted in a foreign jurisdiction as authentic.

Where a notarial certificate or  a letter on the Notary's headed notepaper is required to be drafted and attached to a document - so that, for example, an apostille can be obtained from the Department of Foreign Affairs in order to "legalize" the document in a foreign jurisdiction - the cost is typically in the order of €70 to €100 depending on the nature of the document and the certificate or letter required.

Where there are multiple documents involved the Notary will provide an estimate or quote a fee after seeing and examining the documents.

The fees for the verification and attestation of Adoption Packs for inter-country adoptions reflect the cost of the Notary's services in terms of time spent and the care and responsibility involved. Those who have been involved in inter-country adoptions will be aware that the adoption dossiers sometimes comprise several hundred pages made up of many different documents and letter from various individuals, agencies and state bodies. Often, each page of these dossiers needs to be individually attested; accordingly, in some cases, fees in adoption matters can run to two or three hundred euro.

If the Notary needs to make phone calls to verify any matter, write letters, send emails, consult any website or arrange for printing or photcopying then additional fees will be charged.

In all cases, the Notary will provide an estimate of the fees on seeing the documentation and taking instructions. ​

Making an Appointment to see a Notary Public

If you wish to see Kenneth Enright, Notary Public, please contact our office to make an appointment.

It is important to outline when making the appointment what it is you need the Notary Public to do, to specify what notarial act is required. You may require one or more of the following acts (if you can, please specify which):
​

Notarising a document today requires the same anti-terrorism and anti-money laundering formalities as apply on opening a new bank account. The rules are very strict. You must satisfactorily prove your identity and place of residence and the Notary must keep the identification records for five years. This process has to be repeated every time you go to the Notary unless you have been with the same Notary within the previous three months.

You must prove your identity, and that means producing your original passport. Lesser proof, such as a driver's license, will only be accepted for compelling reasons which must be satisfactory to the Notary. The Notary will give no assurances in advance that your substitute document of identification will be acceptable.

If your passport number is given in the document to be notarised, then the passport must be produced, without exception.

If any other identifying detail is given in the document to be notarised (such as Identity Card number or tax number), then whatever document which proves that other detail must also be produced.

You must prove your current residential address by producing a recent utility bill (not being a mobile phone bill) addressed to you at your stated address within the previous three months.

It is your responsibility to ensure that you understand the document you intend to sign and to have notarised. The Notary Public is not your solicitor or legal advisor and is not competent to translate documents not written in English.

The Notary may question you as regards your understanding of the nature and purpose of the document and will not notarise it if you cannot give the notary the assurance that you understand it but under no circumstances will the Notary advise you as to the effect or purport of the contents of the document.

If the document is technical or written in a language you do not understand, you should have it explained to you by your own legal advisor and/or have it translated by a professional and reputable translator.

The Notary is normally only concerned with the verification of your identity, your name, your address, your signature, and your ability in a general way to understand the document. The contents of the documents, their meaning and effect, and whether you are wise to sign them, are all your responsibility.

If the Notary is satisfied that you understand the document, then he or she will stamp it, sometimes with a statement of similar effect to the following:

‘The within notarial act is limited to the verification of the identity, legal capacity, name and signature of the Appearer, unless otherwise expressly stated in the English Language.’

The Notary may also require you to acknowledge formally in writing in a standard form that you understand the document and that you are not relying on any advice from the Notary as to the meaning or purport of what the document contains. 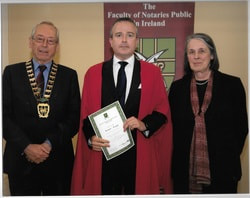 Kenneth Enright was appointed a Notary Public by the Hon. Mrs. Justice Susan Denham, Chief Justice of Ireland on 1 December 2015, following his receiving the award of a Diploma in Notarial Law and Practice from the Faculty of Notaries Public in Ireland. He is pictured here with the Chief Justice and Mr. Michael V O'Mahony, Dean of the Faculty of Notaries Public. Kenneth Enright is authorized to practice as a Notary Public in county Offaly and in the immediately adjoining counties of Laois, Tipperary, Galway, Roscommon, Meath, Westmeath and Kildare.

The functions of a Notary Public

The functions of a Notary Public in Ireland include the following: ​In most cases the documents executed, authenticated, witnessed or drawn up by a Notary Public are for use outside of Ireland.

The Notary has a responsibility not only to the person appearing before him or her but also the the ultimate recipient of the document. This ultimate recipient relies on the Notary's internationally recognized public office, his or her qualifications, training, code of conduct and ethical responsibilities. Ultimately, the value of the Notary's signature and seal is that it is a guarantee of authenticity.

When are the services of a Notary Public required?

Usually, a Notary Public is required only if the documents are for use abroad. If the documents are to be used in Ireland then the attestation or signature of a practising solicitor or Commissioner for Oaths is often all that is needed.

Wherever the documents are to be used, it is important to establish whether or not the person or organisation intended to be the ultimate recipient of the documents actually requires the documents to be attested - or witnessed or sealed or certified - by a Notary Public, as distinct from a solicitor or Commissioner for Oaths.

If you are unsure of whether or not a Notary Public is required and attend at our offices, we will advise you of the position in so far as we can based on the documents produced to us and on your instructions.